If you’re experiencing erectile dysfunction and medications or injections haven’t worked for you, a penile implant may be your solution. Located in downtown Houston, Dr. Robert J. Cornell is one of the nation’s foremost prosthetic urologists. He offers several types of penile implant surgeries and specializes in placing the three-piece inflatable penile implant through a single scrotal incision in a single surgical procedure. To learn more, contact Dr. Cornell’s office or request an appointment online.

What is a penile implant?

A penile implant — also called a penile prosthesis — is a treatment option for erectile dysfunction. It’s entirely concealed within the body and requires manipulation before and after intercourse to make the penis erect or flaccid.

There are different types of implants based on the manner of operation, the naturalness of the erection, and the number of components implanted. Penile implants help many men return to an active sex life, and have a high satisfaction rate among both patients and their partners. 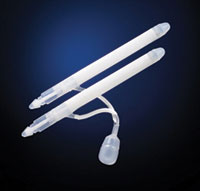 What are the different types of penile implants?

On the other hand, inflatable penile implants are more popular and consist of two silicone tubes inserted into the penis through a single incision in the scrotum.

To produce an erection, you push on a small pump placed in the scrotum, which squeezes until sufficient fluid is transferred from a reservoir into the penile cylinders, achieving a firm erection. When you no longer desire the erection, you push a button on the same scrotal pump, and the valve opens to allow the fluid to return to the reservoir.

Patients have reported that inflatable penile implants feel more natural and allow for control of rigidity and duration of potency.

What are the best penile implants?

American Medical Systems (AMS) has been a leading innovator in the field of erectile restoration for over three decades. Depending on your specific needs, Dr. Cornell recommends two AMS implants: 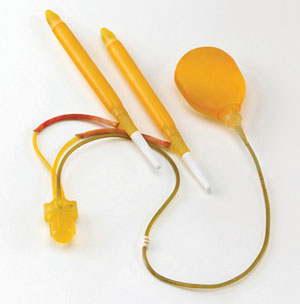 The Genesis uses flexible rods to produce a permanently firm penis, while the Titan is an inflatable device that produces a controlled, more natural erection. Dr. Cornell can help you decide which implant is right for you. He carefully considers medical condition, lifestyle, and personal preferences to help you weigh the pros and cons.

Click here to learn more, or schedule an appointment online or call our office.